EUCLID was represented at the AAU (Association of African Universities) conference of rectors and vice-chancellors (known as COREVIP) which took place in Cairo, Egypt, between July 8 and 11, 2019. The meeting was hosted under the patronage of the President of the Republic of Egypt. 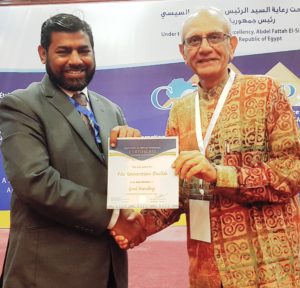 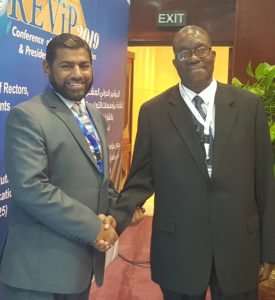 In his speech, the President of Al-Azhar University, Prof. Mohamed El-Mahrasawy, warmly welcomed participants to Egypt and elaborated on the various initiatives being implemented by the Al-Azhar University in collaboration with the AAU. He referenced the African Universities Olympics, and the hosting of the North Africa Regional Office ( NARO) of the AAU. He indicated the commitment of the university to ensure that they work hand in hand with all North African Higher Education Institutions under the AAU NARO office.

Addressing participants, Prof. Orlando Quilambo, the AAU President called on all stakeholders to contribute to ensure that Higher Education in Africa, is among the best in the world. He urged institutions to reform in curricula, pedagogy, and research, in order to engender more innovations. Prof. Quilambo encouraged the inculcation of relevant skills such as critical thinking, effective communication, and entrepreneurship. He called on all parties to

“work to improve investments in higher education to help achieve the African Union’s Vision of an integrated, prosperous and peaceful Africa, driven by its own citizens and representing a dynamic force in the global Arena.”

For his part, the AAU Secretary-General, Professor Etienne Ehile mentioned how crucial it was for academics to position themselves strategically to take advantage of the various opportunities presented by CESA and other global and continental agendas, initiatives and agreements. He reiterated the AAU’s commitment to working closely and collaboratively with all stakeholders in education to achieve the targets of CESA in the most efficient way and within the assigned time-frames to improve the current state of the quality of Higher Education in Africa.

The Minister of Higher Education and Scientific Research of Egypt, Prof. Khaled Abdel Ghaffar expressed their excitement in hosting the rest of the African higher education community in their country and called for more collaboration between African Universities in moving the continent forward.